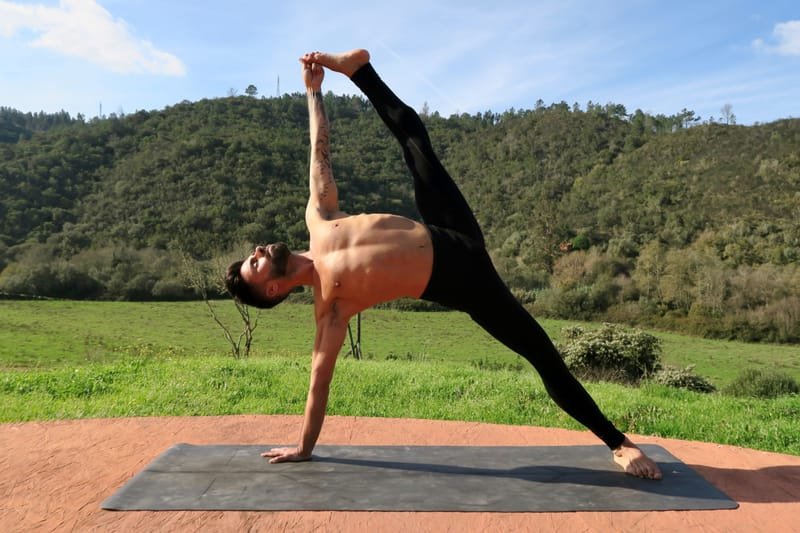 Igor is a traveling Yoga teacher based in Algarve, Portugal. Born and raised in Albufeira, quite early left his hometown to explore the wonders of our world.

In one of many transformative stops he made along the way, he ended up starting a new life style and a fresh perspective to see our human experience. The Universe led him to Rishikesh, The World Capital of Yoga, in India, where he deepened and expanded his physical, spiritual and emotional knowledge for Yoga.

While back at the Western world, he started sharing his passion and practice in daily classes,  workshops,  retreats, festivals and coaching yoga teacher training and he developed a modern and playful way of teaching, combining the understanding of body alignment and anatomy with the joy of fluid movement and being present.

Guided by Nature and Elements,  Igor wants to stimulate body/mind connections to his students. His classes embody creative flows, anatomical cues, explicit access to compact areas of our bodies.

Challenge,  sweat,  constant observation and cultivation of inner peace and gratitude is what to expect.

Vinyasa is a style of yoga characterized by stringing postures together so that you move from one to another, seamlessly, using breath. Commonly referred to as “flow” yoga, it is sometimes confused with “power yoga“.
Vinyasa classes offer a variety of postures and no two classes are ever alike. The opposite would be “fixed forms” such as Bikram Yoga, which features the same 26 postures in every class, or Ashtanga which has the same sequence every time.
The variable nature of Vinyasa Yoga helps to develop a more balanced body as well as prevent repetitive motion injuries that can happen if you are always doing the same thing every day.
As a philosophy, Vinyasa recognizes the temporary nature of things. We enter into a posture, are there for a while and then leave.
While Vinyasa, or Vinyasa-Krama, dates back to the Vedic age—the earliest period of yoga thousands of years ago—it referred to a series, or sequence of steps, to make something sacred.
The movement practice of Vinyasa is said to begin with T Krishnamacharya who has had the largest influence on how yoga, in general, is practiced today.
Put all this together and Vinyasa, is a breath initiated practice, that connects every action of our life with the intention of moving towards what is sacred, or most important to us.
While Vinyasa Yoga is one of the most popular forms of the practice in the world today, it is not well understood.

As with many things in yoga, the definition is dependent on the context and on who you ask. Below are the more common definitions.
“The Sanskrit word Vinyasa comes from a prefix vi, which means variation, and a suffix, nyasa, which means ‘within prescribed parameters.’” Srivatsa Ramaswami, student of Krishnamacharya for more than thirty years.
He goes on to refer to classical yoga, from the Yoga Sutras of Patanjali, for the specific parameters:
Steadiness (Sthira)
Comfort (Sukha)
Smooth and Long Breathing (Prayatna Sithila)

The term Vinyasa is derived from nyasa, meaning “to place,” and vi, meaning “in a special way.” This indicates that we are not “throwing our bodies around” but are bringing consciousness to each movement in each moment.
Shiva Rea adds, “Vinyasa in its original meaning from the early Tantras is understood as the ‘sequence of consciousness,’ or how life unfolds from…the creative pulse of life.”
Vinyasa can be defined as our external movements that are an expression of how we think and feel.
Synonyms: Continuous. Seamless. Integrated. Change. Rhythm. Evolve. Cycle. Connected. Movement.
Characteristics of Vinyasa Flow Yoga
Vinyasa Yoga connects one posture to the next using the breath. This can be thought of as linking or flowing into postures which is sometimes why it’s called “Flow Yoga”. The opposite of this would be an alignment based class where students engage with a posture, explore it for a period of time and then “break the posture” by coming out.
“Transitions” are what connect one posture to another in Vinyasa. They are the in-between part. What is not always appreciated is that transitions are considered postures themselves. To move in a more graceful, connected way, allot just as much time developing skill in the transitions as you do in the asana.
Vinyasa is synonymous with movement. Moving in and out of postures is the obvious movement but even in stillness Vinyasa is represented by the beat of your heart and inhale/exhale of your breath.
Move with breath. Breath initiates the movement of Vinyasa which is why you’ll hear it referred to as a “breath-synchronized” practice.
Ujjayi Breath is the breathing technique used. It is done by inhaling and exhaling in a rhythmic manner through the nose. The overall sensation is one of relaxation.
Vinyasa practice generates heat and can add a cardiovascular component not always present in other forms of postural practice.